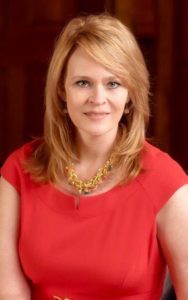 Dana Brisendine is the President of HMS Capital Management, LLC and is the Managing Member of the 576 Family of Hedged Equity Funds who has been in the investment management field for over twenty-five years. She started her career as a portfolio manager at the Tennessee Consolidated Retirement System, where she was part of a team managing the State of Tennessee Pension Fund.  While at the state, she was one of the first female portfolio managers.

Dana developed a love of No. 576 as a small child when she visited Centennial Park with her father. The two of them spent many of weekends climbing on the locomotive and exploring Nashville’s history. She happened to marry a rail enthusiast and the two of them have spent many hours visiting historic railroad sites and riding along behind vintage locomotives. 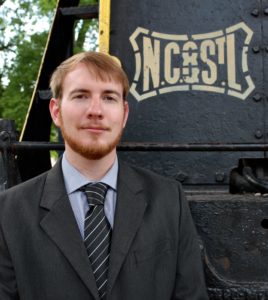 Joey Bryan is a native of Franklin, Tennessee and spent his adolescence visiting No. 576 in Centennial Park. Joey is a preservationist, historian, and writer with a passion for saving America’s industrial heritage. He earned a B.A. in History from the University of Alabama in 2012 and a M.A. in Public History from Middle Tennessee State University in 2015. While at MTSU, he worked as a research assistant at the Center for Historic Preservation.

In the summer of 2013, Joey interned at the Virginia Museum of Transportation during the kickoff of the “Fire Up 611!” fundraising campaign. He worked for the museum the following year as Assistant Communications Manager assisting with social media, marketing, and media relations during Norfolk & Western 611’s first excursion season. Because of his involvement with the 611 restoration effort, Joey wrote his master’s thesis on the economic and interpretive benefits of collaborative partnerships between railroads and non-profit organizations for the operation of steam-powered excursions.

Joey’s ties to Nashville railroading date back to his great-grandfather who worked for the Nashville, Chattanooga, and St. Louis Railway as a clerk in the general office building on Broadway. Joey also serves as Historian & Preservation Officer for Nashville Steam 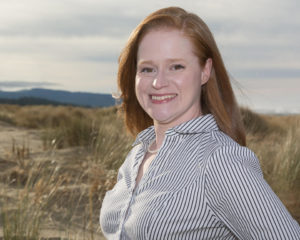 Rebecca came to NSPS with a passion for railroad and railroad landscape photography.  After inquiring about photographing the locomotive at a work session, she was invited to not only photograph the locomotive, but help to restore it as well.

Rebecca was born and raised in rural Ohio outside Haskins.  She began an active duty Army career immediately after high school and completed Basic Training at Fort Leonard Wood, Missouri. She graduated from Advanced Individual Training as an All Source Intelligence Analyst at Fort Huachuca, Arizona. After completing AIT she was stationed in Bamberg, Germany with the intelligence section of the Headquarters and Headquarters Detachment of the 793rd Military Police Battalion. She deployed with the unit for seven months from 2002-2003 to Camp Bondsteel, Kosovo in support of the United Nations Mission in Kosovo and to Camp Ashraf, Iraq in support of Operation Iraqi Freedom from 2004-2005. After her deployment to Iraq she left active duty after nearly five years and moved to Clarksville, TN while her husband was stationed at Fort Campbell. She spent the next year and a half with the 304th Military Police Battalion in Nashville, TN as the Intelligence section supervisor before being honorably discharged from the Army after completing her enlistment.

She has worked in the retail industry for eight years starting as a part-time sales associate and advancing to Assistant Store Manager with three large companies. She has previously worked in the non-profit sector in 2010 as the Executive Assistant to the Director of Big Brothers Big Sisters of the Greater Virginia Peninsula in Williamsburg, Virginia while her husband was stationed at Fort Eustis. Currently she is attending Hopkinsville Community College to complete her associate’s degree with plans to transfer to a four year university to complete a Bachelor’s Degree in Business Administration.

When not working or attending school, Rebecca enjoys spending time with her husband who encourages her in her railroad photography.  She shares her railroad photos on Facebook and Instagram as “Life On A Rail.” She volunteers working on No. 576 whenever she can, usually getting wedged and squeezed into the smaller dirty places like the firebox and tender. After growing up in the country and spending time in the Army, getting dirty working on the locomotive doesn’t bother her in the least. She also enjoys being an ambassador of sorts for the young girls that visit No. 576 with their families showing them that, they too, can work on projects like this that are traditionally done by men. 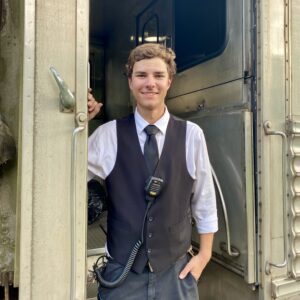 Stephen was born and raised in Franklin, Tennessee. He has always been passionate about building and repairing machines, as well as railroad equipment preservation and public service. In 2020, He earned an A.S. in Engineering Systems Technology from Columbia State Community College in Columbia, Tenn, and plans to pursue a B.S. in Engineering Technology from the University of Tennessee at Chattanooga.

In 2012 Stephen began car hosting on the Tennessee Central Railway Museum’s excursion trains, as well as helping out around the museum. Over the next few years, he got more involved and began working in the shop, aiding in the restoration and maintenance of several historic diesel locomotives. In addition, he played a significant role in the maintenance of the museum’s fleet of passenger cars. In 2017 he was qualified on the Nashville and Eastern Railroad as a Conductor and began regularly conducting the Museum’s excursion trains. He is currently a student locomotive engineer.

In 2017 Stephen became involved with the Williamson County Rescue Squad as a recruit volunteer firefighter. Over the course of the next few years, he was promoted to Firefighter, Driver, and now serves as an Engineer, with certifications in Firefighting, Technical Rope Rescue, Vehicle Extrication, Swiftwater Rescue, and Tennessee state Emergency Medical Responder. His duties with NSPS include scheduling and conducting volunteer safety classes and coordinating volunteer work sessions. 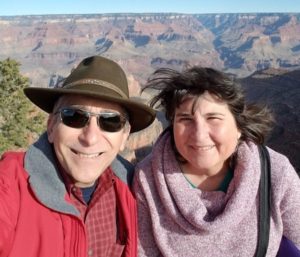 Julie and Richard Bayhi serve as co-managers for the NSPS Company Store, and reside in Mt. Juliet, Tennessee. They always look for new and exciting products to offer on the NSPS webstore, eBay, and in person at various train related events and shows. Both are graduates of the University of New Orleans.

Julie is a New Orleans native and received a B.S. in education, with a history major and a math minor. She is retired from teaching after 30 years as a high school advanced math teacher in both Louisiana and Tennessee. In 2004, Julie served on the curriculum writing team for the guaranteed curriculum program for the State of Louisiana; that same year she was nominated for Educator of the Year. When she’s not working with NSPS, Julie also volunteers at the Country Music Hall of Fame and Museum in Nashville, where she conducts both school tours and VIP tours.
Richard is also a native of New Orleans, and has previously served as a financial advisor to the NSPS board of directors. As an accountant for over thirty years, he was employed by the Oreck Corporation for twenty-seven years where he managed treasury and cash functions, sales audit and physical inventories for retail locations, and retail lease administration. Richard also authored the company newsletter. He is currently employed by Genesco in Nashville as a lease accounting specialist. Richard’s father, a WWII veteran, was a draftsman in the marine industry, mainly designing pressure vessels, along with former employees of Higgins Industries, builders of the PT and LCVP boats used during the war.
Julie and Richard are past members of the National Railway Historical Society, New Orleans Chapter – where they frequently served as car hosts, and assisted with souvenir sales during the Southern Railway Steam Excursion program, which featured such steam engines as 4501, 722, 750, 630 and CP 2839. They have also had the opportunity to take other steam trips, including NS excursions with the N&W 611 and 1218, as well as the Durango and Silverton in Colorado, and many others. They both love the outdoors and their goal is to one day visit all of America’s National Parks.