C.M. Darden – Designer of the 576 and Steam Locomotive Pioneer

By Nashville SteamMay 10, 2016History
No Comments 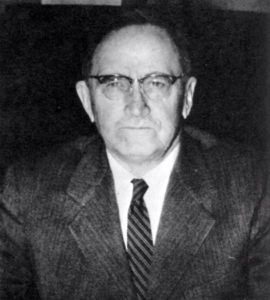 Clarence M. Darden, Superintendent of Machinery – NC&StL (1930 – 1957) was a pioneer in the field of railroad mechanical engineering. His work not only led to the creation of NC&StL 576 and its siblings, but he was a visionary in the use of one-piece cast frames and the way he employed the most modern technology of the era.

Darden was born on a farm in Greensville County, VA., near Emporia on November 11, 1887. Educated in Richmond where he took courses at the old Virginia mechanical institute, he entered the Engineering Department at the Richmond plant of the American Locomotive Company as a draughtsman. From 1908 – 1912, Darden served in the Mechanical Engineering Department of the Chicago & Alton RR at Bloomington, Ill., coming to the NC&StL Ry on March 1, 1912 as Chief Draughtsman, to which the additional duties and title of Mechanical Engineer were soon added. On April 15, 1930, Mr. Darden became Superintendent of Machinery until 1957 when transferred to the L&N RR with the same title until retired on March 1, 1959.

One of the early proponents of steel bed frames cast integral with cylinders of steam locomotives, Darden was a member of the American Society of Mechanical Engineers. One of his favorite projects was the elimination of boiler studs by moving as many locomotive accessories and pipes as possible to hang on the frame instead. The work in this field resulted in US patent No. 1,955,376, issued to Mr. Darden in May 1934, and used by the Commonwealth Division of General Steel Castings Corporation (old Commonwealth Steel Corp.). An image of a Class J3 frame on the erecting floor is shown below.

Later, Mr. Darden’s ideas were incorporated in the design of modern steam locomotives not only built for North American railroads, but also engines shipped after the Second World War to many nations, including India, Turkey, Africa, and Australia. Thus Mr. Darden’s work has benefited railroads the world over.

The Santa Train returns to the rails tomorrow for its 80th anniversary! We were able to ride the Santa Train with our good friend Marty Stuart in 2019 and got to see this incredible operation up close. A huge thanks to CSX for keeping this tradition rolling along and to all of the amazing volunteers and local sponsors for doing their part to bring the spirit of the season to those in need. Wishing everyone safe travels tomorrow! ... See MoreSee Less

Thank you to everyone who attended the Fall Open House yesterday! We had a great turnout in spite of the weather. And a big thanks to all of our volunteers for their hard work welcoming our guests into the shop and showing off our progress. Stay tuned in the weeks ahead for more announcements and opportunities on how YOU can help with the restoration of No. 576! ... See MoreSee Less

Well it wouldn’t be a Nashville Steam event without the chance of rain 🌧. But don’t fret! We’re pushing ahead with the Nashville Steam-576 Fall Open House rain or shine! The two staybolt demonstrations are weather dependent, but there’s still plenty to see regardless of how the weather is acting. We hope to see you down at the shop! ... See MoreSee Less