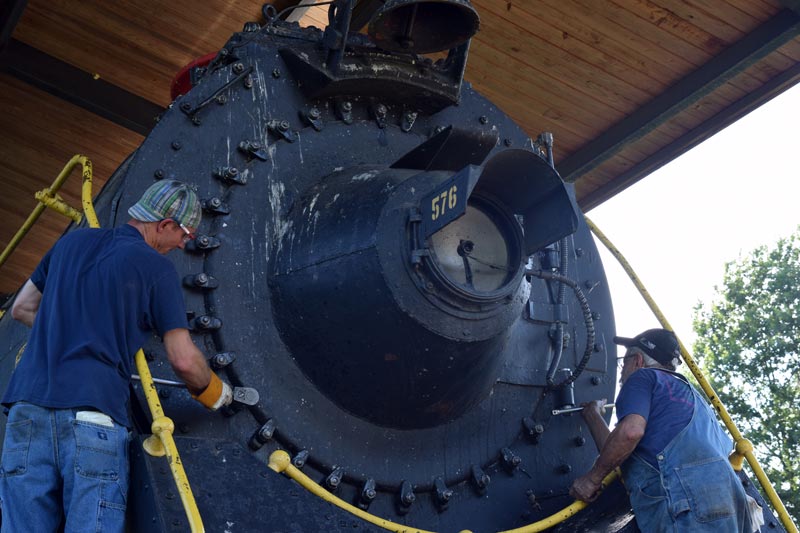 On July 1st and 8th, NSPS undertook preliminary inspections on No. 576, and the group is quite pleased to report the findings.

On July 1st, we began our inspection of the firebox area of the boiler. This including the removal and inspection of the washout plugs, which still where coated in valve oil, visual interior boiler inspection through the washout sleeves, as well as spot-checking firebox sheets for thickness using an Ultrasonic Tester. Inspection of the boiler interior revealed a very clean state with minimal scale, and the staybolts  showed no erosion or “necking” down. The interior of the firebox syphons also revealed that they were clean, and minimal scale. It is obvious that the NC&StL had a very good water treatment program and the shop forces did an excellent job in drying out the boiler after its retirement.

Inspection of the firebox revealed that the NC&StL replaced almost the entire firebox with 7/16″ steel sheets at a very early  time (4-2-43), as opposed to the 3/8″ sheets that were installed by ALCO. Thicknesses ranged from .388″ to .420″. Also noticed was that many smaller sections of the firebox had been welded in, over the course of its service life.

In the afternoon, we moved towards inspecting the driving axle, roller bearing, journal boxes. Upon inspection, we found that all 8 boxes were full of oil, had no water in them, and revealed no signs of rust or pitting. While under the frame, we greased all spring rigging equalizer pins and noticed 2 of the pins still had fluid oil that began to drip out of them as we filled them with fresh grease. We also inspected lubricator and verified they still work and distributed oil to various lubrication points.

The Team met on Friday, July 8 to continue our inspection of No. 576. At this meeting, we inspected all roller bearing boxes on the pilot truck, and again, they were full of oil, no water, no rust was found. We also pulled off one of the trailing truck roller bearing caps to reveal more of the same. On these we were saw not only no signs of water and no rust, but also that the rollers and bearing races were not scored or pitted. We drained the old oil out, after obtaining a sample, and flushed the bearing and filled with fresh roller bearing oil before sealing it back up.

Meanwhile, work on the smokebox door dogs and hinges was being preformed to gain access into the smokebox. After much tapping and soaking with penetrating oil, the hinges and hinge pins slowly began to cooperate, and the smoke box door was open enough to reveal a very well-sealed, and almost new smokebox interior!

To our pleasant surprise, it appears that the NC&StL reworked the entire front end of No. 576 shortly before entering the park in 1953. The superheater units appeared new, manufactured in 1949, with only slight surface rust, and shop storehouse tags still applied to them. Upon further inspection and to add to the argument that the superheater units were new and possibly only had a steam test applied to them, is that in the bottom of the smokebox, directly under the header, we found old Emory paper that had been used to clean the surface of the header for the installation of the superheater units!

The backside of the superheater unit necks are still coated in the coal-tar epoxy as applied by Elesco and the epoxy was burned off and slight surface rust was observed on the units in the flues. There had been some weld repair to the front tube sheet and we suspect the steam test revealed it still leaking and therefore the decision was probably made to not continue to use the locomotive. We also noted that the bottom of the smokebox revealed no wastage, all good saddle bolt heads, and no rust jacking.

To say the least, our findings, so far, are extremely encouraging! We are extremely thankful and grateful for the care and foresight that the NC&StL shop forces had to properly prepare No. 576 for long term storage, in an outside environment, that enables it to be a prime restoration candidate. 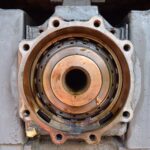 Rachel Weibel looks on as Shane Meador and Jason Sobczynski inspect inside the smokebox. 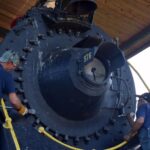