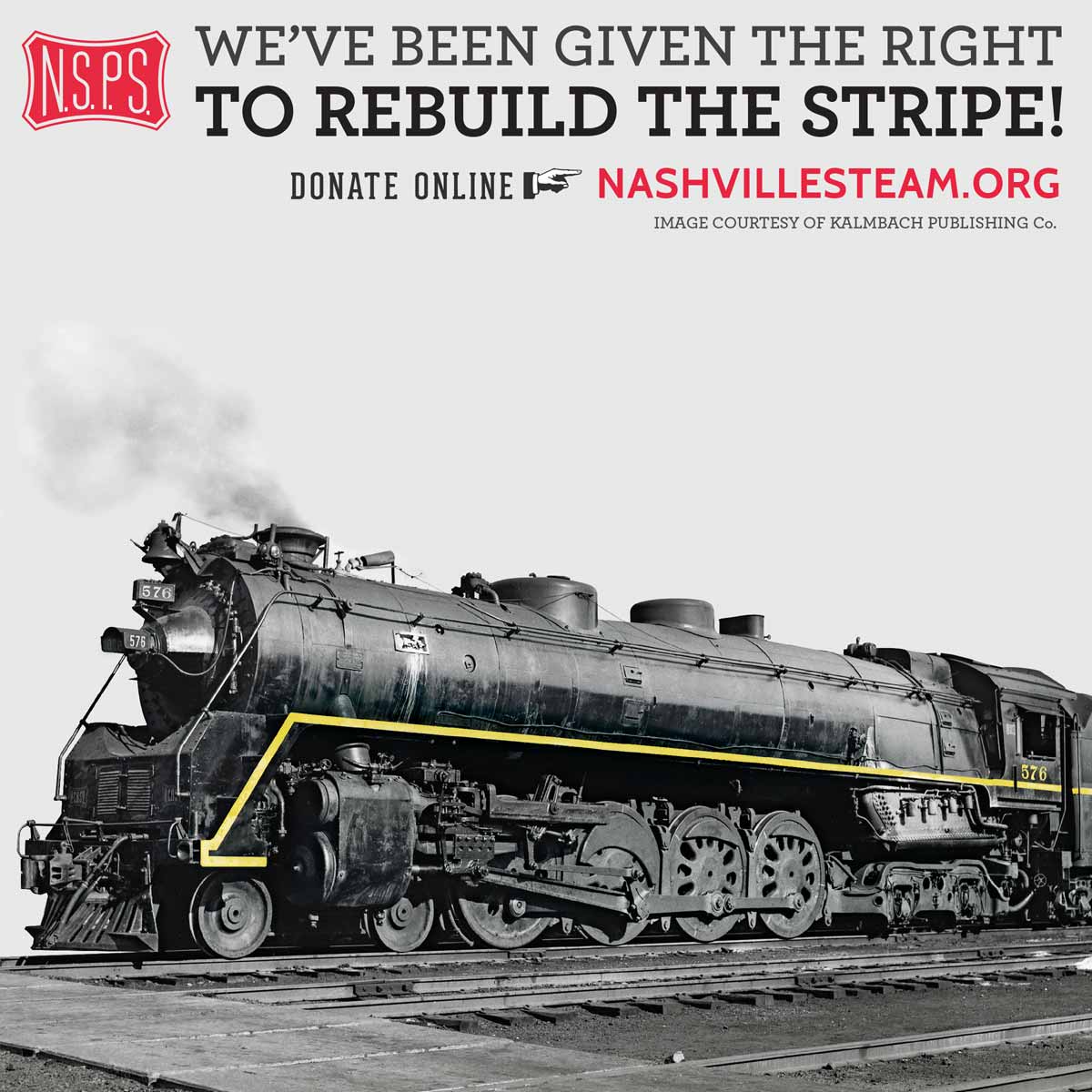 NASHVILLE, TENN. August 17, 2016 • The not-for-profit Nashville Steam Preservation Society (NSPS) and Metro Nashville have reached an agreement to permit the relocation and restoration of steam locomotive No. 576, a 74-year old steam locomotive displayed in Centennial Park since 1953. As part of the 23-year lease, No. 576 will be returned to operating condition and placed in service as a tourist attraction on the Nashville & Eastern Railroad to operate excursion trains out of downtown Nashville.

“This ordinance presents a really interesting opportunity for Nashville; and it’s an exciting one,” Metro Council Member Angie Henderson explained to the entire Metro Council on Tuesday night. “Steam locomotive No. 576, which has been sitting in Centennial Park for many years, now has the opportunity to be restored to active use for our community and for visitors, and so this [lease] gets the ball rolling.”

The lease approval follows months of mechanical inspections, community meetings, and research, as the preservation society consulted with the local business leaders, expert mechanical contractors and others.

“Operating steam locomotives are rare, thus the ones that are restored to operate in exhibition service attract incredible crowds wherever they go,” explained NSPS President Shane Meador. “An investment in this effort ultimately means an investment in Metro Nashville – past, present and future.”

With significant monetary pledges made already, the organization must raise $3 million in order for No. 576 to operate again. The exacting rebuild process will see the locomotive disassembled and reduced to its frame, boiler and driving wheels where it’ll be thoroughly inspected and re-machined as necessary. The rebuilding will take place just a few miles from downtown Nashville. The organization is also seeking an additional $2 million to construct a permanent, visitor-friendly home and facility for the locomotive that will allow for its continued maintenance as well as to provide an interactive educational environment.

Retired in 1952, No. 576 was one of 20 J3 Class steam locomotives built for the Nashville, Chattanooga & St. Louis Railway. Recognizable by characteristic streamlining and yellow striping, No. 576 and other J3 Class engines earned reputations as mechanical marvels, capable of speeds over 100MPH.

“We are optimistic that we will have the funds to relocate No. 576 either late this year or early next year,” said NSPS Director Alex Joyce. “Once at its Nashville restoration facility, we expect the project to take 3 to 4 years to fully restore the locomotive to an operational historic icon for Nashville.”

NSPS must raise an initial capital goal of $500,000 before relocating No. 576 to its restoration site.

“The Stripe, as we call it, is not only an incredible machine, but a potentially powerful teaching tool,” said Project Foreman Jason Sobczynski. “We are planning a special open house this fall where visitors can meet the team, learn more about the organization’s goals, and explore the uniqueness of No. 576.”