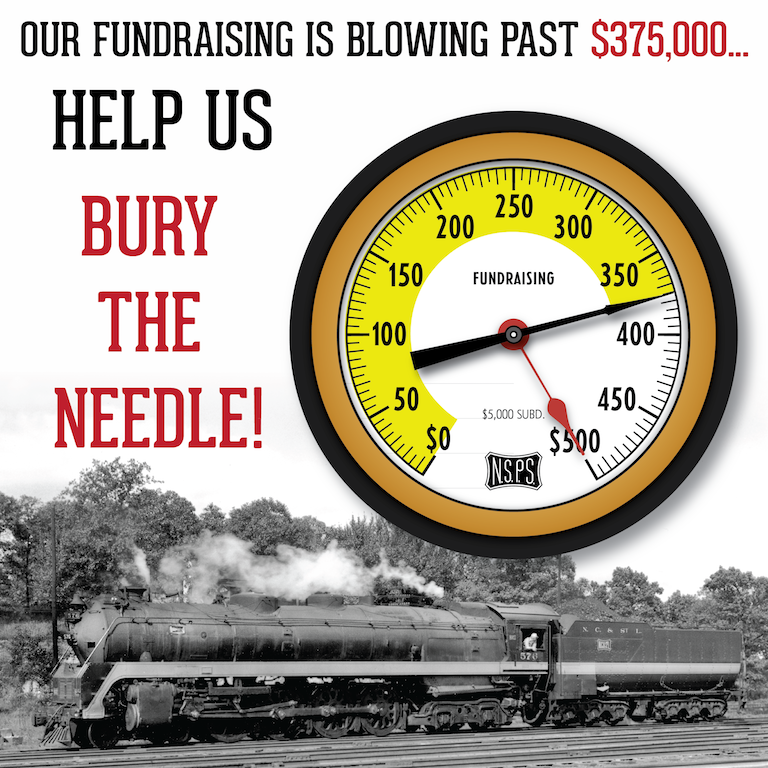 The Nashville Steam Preservation Society (NSPS) today announced that it is only $125,000 short of its initial $500,000 fundraising goal for the relocation of the famous Nashville, Chattanooga & St. Louis Railway (NC&StL) Steam Locomotive No. 576, on display in Centennial Park since 1953.

Known as the “Stripe,” the locomotive is the last remaining J3 4-8-4 steam locomotive designed and built by the American Locomotive Company for the NC&StL Railway. The locomotive, long associated with Nashville’s Country Music roots, sits in Nashville’s Centennial Park eagerly waiting for restoration and the return to the high iron in excursion service.

As part of the lease agreement with the City, NSPS must raise $500,000 before the historic locomotive can be relocated. When the remaining $125,000 is raised, the locomotive will be removed from its display site and transported to the initial restoration facility approximately five miles away.

“The 576 is a beloved local icon that toured throughout the South from Memphis across the state to Nashville and on down to Chattanooga and Atlanta,” said NSPS President Shane Meador. “Restoring the last remaining Stripe will serve as a visceral link to the history of Nashville.”

With a number of special events planned during peak summer months and another fundraising push to rail fans around the world, Meador hopes that the group can raise the remaining $125,000 by the end of September. “If that happens, we can move No. 576 out of the park by the end of the year,” he said.

Nationwide support for the Nashville landmark

For decades, families and friends gathered in front of No. 576 for pictures. Johnny Cash posed next to the locomotive for the cover of Life Magazine in 1969. “If you grew up in Nashville, chances are you had your picture taken in front of No. 576 at some point in your life,” Meador said. “The 576 is as much of a Nashville landmark as the Ryman Auditorium, the Parthenon, or Union Station.”

Even though No. 576 is as Nashville as country music, the NSPS reports that donations have come from across the country. A $75 for 75 Campaign, launched in September 2017, marked the locomotive’s 75th anniversary of the date the locomotive entered into service. The campaign was boosted by a $50,000 matching grant from the Candelaria Fund in California. That effort alone raised more than $120,000.

The NSPS’ hope is that the restoration of the locomotive will celebrate Nashville’s musical roots, add to Nashville’s vibrant tourism industry, and help younger generations imagine careers in technical trades such as welding, machining, and mechanical comprehension.

“When people see No. 576 thunder past them on the rails, they’ll see the ultimate in power and machinery,” Meador said. “Steam locomotives are living and breathing classrooms of history and science. By restoring Nashville’s own No. 576, we are teaching an important but often forgotten aspect of our history and showcasing the mechanical ingenuity of its design and the science of how these machines work.”

“Hearing the whistle and the clatter of the wheels against the steel rails is musical,” NSPS Communications Manager Joey Bryan added. “The 576 has a beat all its own, just like the city it served. I can’t wait to hear that rhythm.”