By Joey BryanNovember 7, 2019Uncategorized
No Comments 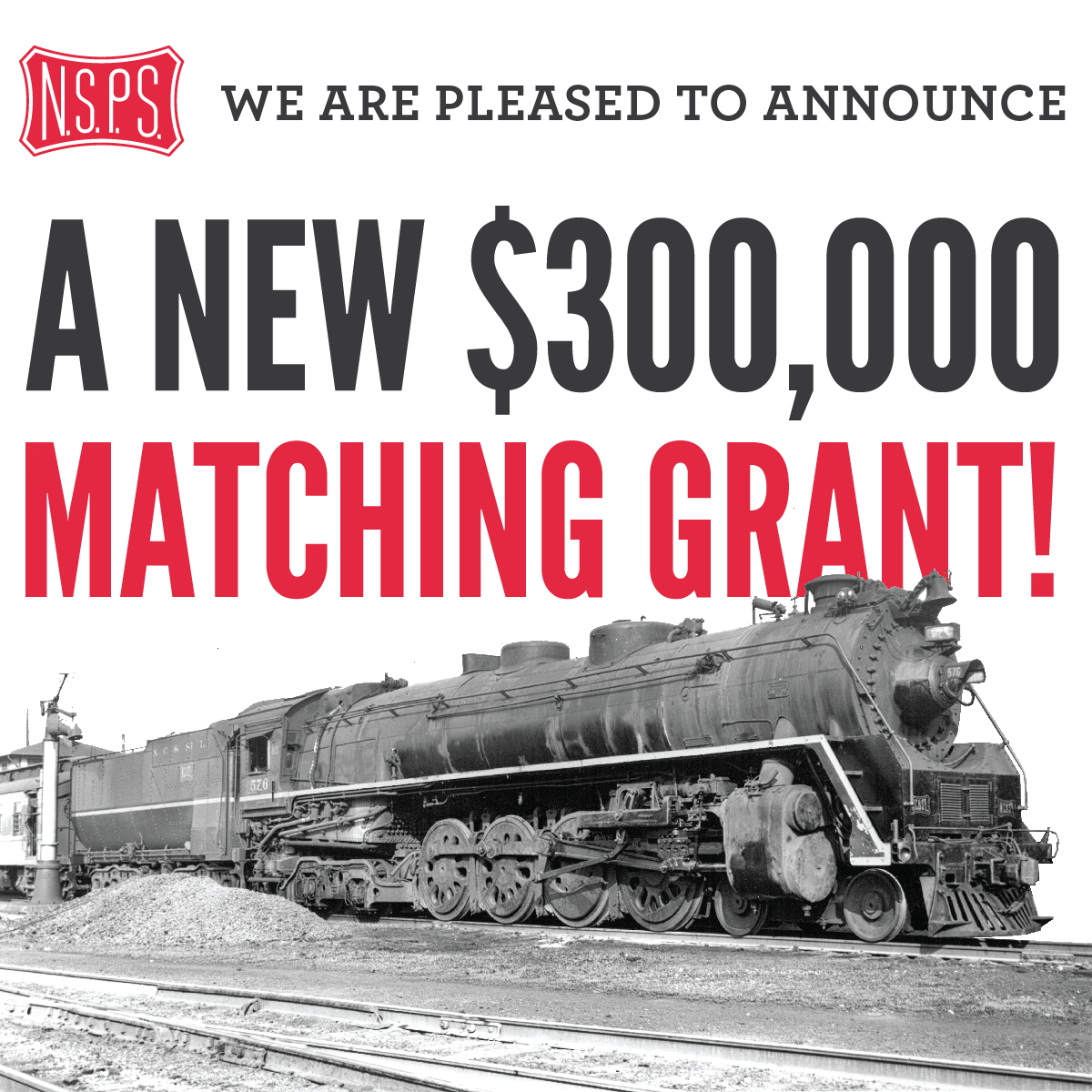 NASHVILLE, Tennessee – As Nashville’s legendary steam locomotive No. 576 is disassembled and each component refurbished, the campaign to support its full restoration to operational condition has gotten another big boost of private support. Former railroad executives and rail history supporters Richard Tower and Wick Moorman have partnered in offering to match up to $300,000 in contributions of $1,000 or more made between now and Dec. 31, 2020.

“The restoration of No. 576 is well underway – our greatest challenge is funding, so this is an incredibly important gift,” said NSPS President Shane Meador. “If we can raise the funds to maximize the matching potential, then we will be well over halfway to our goal, and the restoration timeline can remain on track.”

Richard Tower loves railroads – the history, the significance, the engines that run them, and the process of restoring them to their former glory for the benefit of future generations. Through his family’s San Francisco-based charitable foundation, The Candelaria Fund, which he runs with his wife, Caroline, Tower has played a significant role in bringing numerous historic locomotives back to live rails.

Professionally, his career in railroad operations with Amtrak, Southern Pacific Transportation Company and the engineering firm Wilbur Smith Associates spanned from Washington, D.C. to Detroit, Chicago and San Francisco. He became president of The Candelaria Fund in 1997, and has been involved in multiple successful historic rail preservation projects. The Cumbres & Toltec Scenic Railroad Company, where he served as vice president and treasurer for four years, was named the Best Train Ride in North America by USA Today, and became a National Historic Landmark in 2012.

Charles W. “Wick” Moorman is the former president and CEO of Amtrak, and earlier served as chairman, president and CEO of Norfolk Southern Railway, the company he joined as a college student in 1970. In 2010, Moorman was named Railroader of the Year by Railway Age magazine, and in 2011, he helped spearhead the revival of 21st Century Steam, Norfolk Southern’s popular steam locomotive excursion program.

“The Candelaria Fund has a preference for those organizations that are primarily led by volunteers, and which have active community support and involvement,” Tower says. “With our limited resources, we are interested in efforts that help communities and individuals to collaborate to promote their interests, and Wick Moorman has stepped up in a big way to increase the amount of challenge to encourage it,” Tower said.

“We are aware that much more money must be raised – this is a $2+ million project – before the locomotive can begin pulling excursion trains, but we are confident this can be done,” he says. “We have been impressed with the spirit and energy of the Nashville community and their affection for this symbol of the city’s history. It is our hope that this commitment inspires local Nashville area businesses, charitable organizations and individuals to join us and surpass what we’ve already done.”

To date, the non-profit Nashville Steam Preservation Society (NSPS) has raised approximately $1 million toward the total project cost, and is deep into the restoration at the Tennessee Central Railway Museum, located in the Railyard District just east of downtown Nashville.

“It takes a community to be successful with a project of this scale, and we are very thankful for the efforts of supporters like Richard Tower and Wick Moorman. We have a couple hundred volunteers, all of whom are contributing their unique talents and expertise,” said Meador, who has led the restoration of several historic locomotives around the country.

To donate to the restoration of Nashville’s legendary No. 576, visit:
nashvillesteam.org/donate/