Trains Magazine Announces Nashville Steam as the Next Preservation Partner 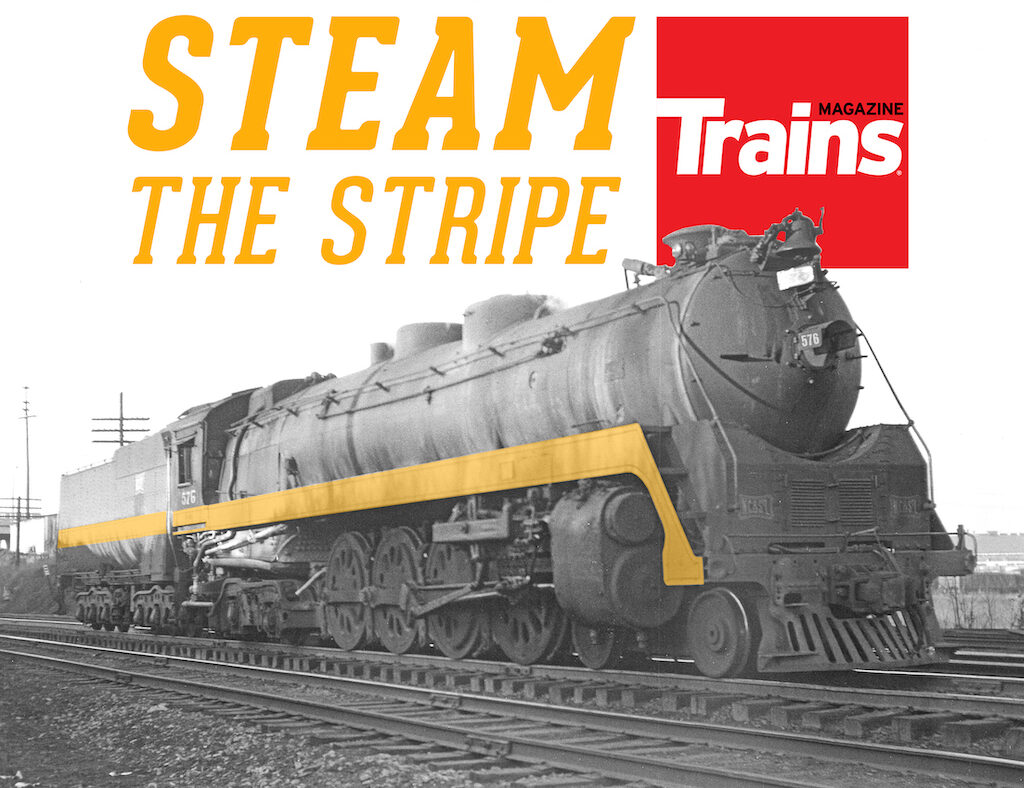 Trains Launches ‘Steam the Stripe’ Campaign for No. 576

WAUKESHA, Wis. — For only the second time in the 81-year history of Trains Magazine, the publication, website, and special events brand will sponsor a year-long fund-raising partnership with a non-profit to advance a landmark project in American railway preservation.

The 2021-2022 Trains Magazine Preservation Partner is the Nashville Steam Preservation Society, home of the operational restoration of Nashville, Chattanooga & St. Louis (NC&StL) 4-8-4 No. 576, a 1942 Alco that has been silent since 1952. The campaign is named “Steam the Stripe,” after the locomotive’s nickname that came from the long yellow band along its running board.

The J3-57 locomotives were among the most modern to run in the southeast and were known for their excellent performance during World War II. No. 576, the sole survivor of the class of 20, will pull excursions on the Nashville & Eastern, a part of the R.J. Corman railroad group.

In March, the John Emery Rail Trust announced a $40,000 donation toward the project, its first grant to Nashville Steam. After years of planning, No. 576’s return to steam began in January 2019 with the locomotive’s move from Nashville’s Centennial Park, its display home of six decades, to the Tennessee Central Railway Museum shop, with great cooperation and assistance from CSX and R.J. Corman.

The goal for Trains readers is $600,000 over the course of 2021-2022 in which the engine’s drivers and trucks will be removed for renovation and reinstalled, and the locomotive’s boiler hydrostatically tested for its 80th anniversary in August 2022. Contributions can be made online or by mail by clicking here.

“Steam the Stripe” follows Trains’ initial preservation partnership in 2020 and 2021 to “Steam the Last Baldwin,” the restoration of Western Maryland Scenic Railway’s former Chesapeake & Ohio 2-6-6-2 No. 1309. The locomotive test ran New Year’s weekend 2021 and is undergoing final repairs and awaiting track work before entering regular service in the second half of 2021.

“In 576, we have a landmark steam locomotive — built late and modern, and a perfect engine to show steam technology in its finest hour,” Trains Magazine Editor Jim Wrinn says. “Given that it was retired so early, no one is alive who experienced these locomotives. Now, if we all get behind this project, we can change that. Best of all, we have a locomotive with a railroad to run on and a great story to tell new generations.”

Nashville Steam President Shane Meador says, “We are honored and grateful to be working with Trains to share our exciting project of restoring a one-of-a-kind treasure from a little-known railroad once headquartered in Nashville, Tenn. With your support, the rails will sing once again with a Stripe in stride while allowing passengers an opportunity to experience middle Tennessee behind a restored No. 576.”

No. 576 was designed in Nashville and built in 1942 to haul heavy troop and supply trains during the Second World War. It is a thoroughly modern locomotive, whose lightweight and powerful design made it well suited to operate on the hilly, curvy lines of the NC&StL. Post-war, the locomotive went on to haul mainline passenger and freight trains between Memphis and Atlanta from the railway’s Nashville headquarters.

By 1952, the NC&StL Railway had pulled No. 576 from regular service, but the company wanted to do something special for the city it called home. One year after its retirement, through the hard work of railroad management and Nashville Parks Department officials, the NC&StL presented No. 576 to the City of Nashville, placing the locomotive into Centennial Park, making it the first modern steam locomotive to be displayed in a city park for display in the U.S.

In 2016, NSPS was granted a lease from Metro Nashville to restore No. 576 to operation. NSPS launched this campaign to raise the funds necessary to place No. 576 back onto the rails and under steam. Please be a part of this truly historic endeavor.